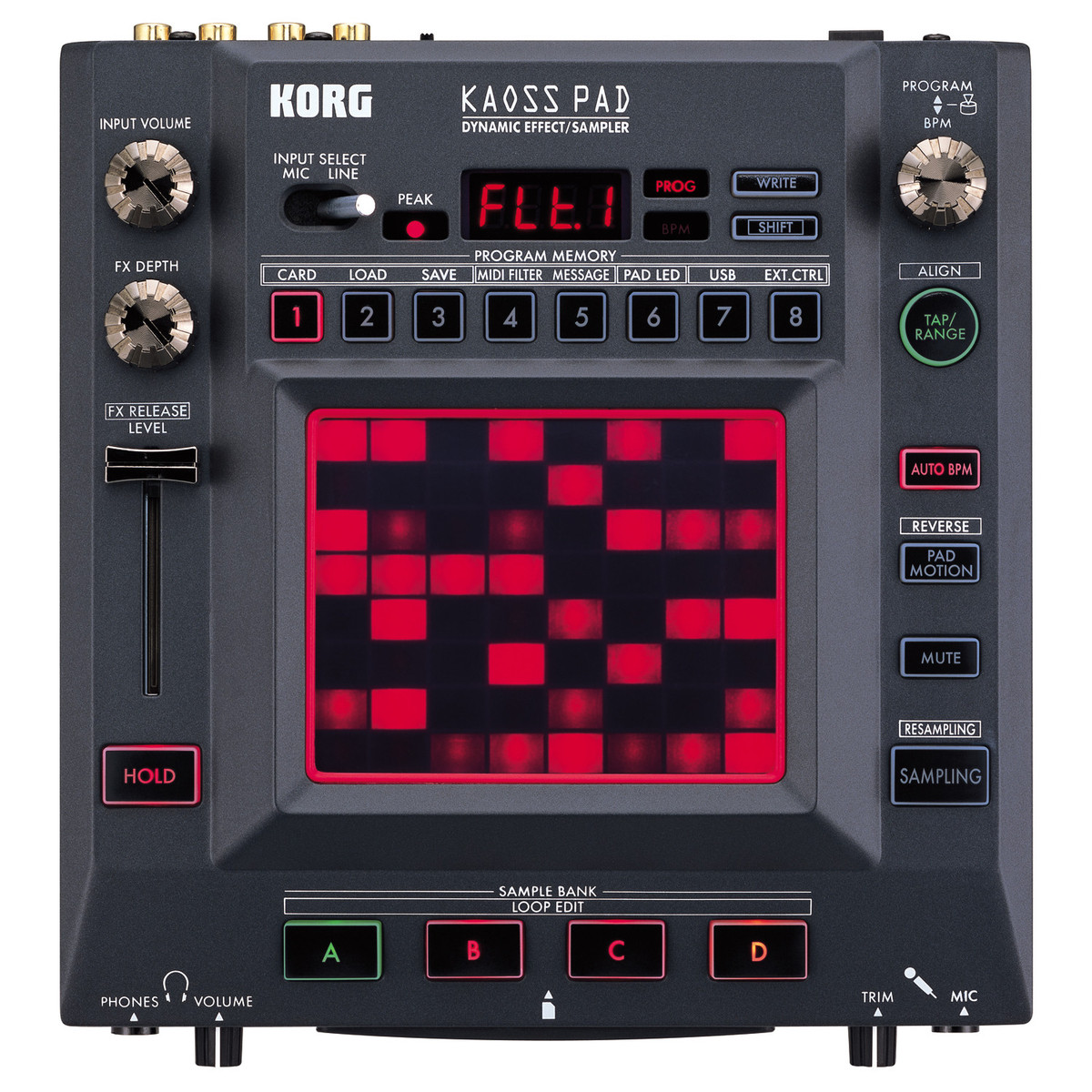 Korg’s KAOSS technology has been embraced by DJs, musicians and producers alike. No other interface is as intuitive, immediate or just plain fun to use. By simply touching, tapping or sliding your finger over the touchpad, the all-new KP3 allows you to control multiple effects parameters and manipulate samples in real time.


More than a processor, the KP3 is a complete instrument allowing you to manage, recall, and play back samples; sample on the fly; and add dynamic processing to any audio signal or to the samples themselves.

This latest KAOSS incarnation has been completely overhauled to enhance your creativity, with significant advances in every area. New effects algorithms, synth sounds derived from our RADIAS engine, bigger and better sampling plus computer connectivity all point to the fact that the KP3 is an entirely new KAOSS instrument. A new pad lighting system places 64 individual LEDs in an eight by eight grid under the pad, providing visual cues as to the current program, held position, etc. – it can even scroll a custom message across the pad!

Killer Effects come to Life
The KP3 comes equipped with 128 great-sounding effect programs Sure, the traditional essential effects are there – delays, flangers, etc., and they sound amazing. But using newly developed algorithms, the KP3 also provides fresh, exciting effects such as a grain shifter, decimator, a vintage analog style filter with a tone-bending drive circuit, and expanded EQs that are controlled directly from the pad. And moving beyond effects, there are also drum grooves and even RADIAS-inspired vocoder and synthesizer sounds that can be played free-form on the X/Y pad.

As you move your finger across the touchpad and find that “sweet spot”, pressing the Hold button will lock the settings, so you can take your hand away to do other things. The LED grid on the touchpad will show the held location, so you can pick up where you left off without any “jumps”. Better yet, Pad Motion can memorize and repeat a fluid or complex gesture played on the pad. Once again, the new pad lighting system enhancements can actually display the Pad Motion pattern as it plays.

A separate FX Depth knob sets the overall balance between the original signal and the effect, so you can add just the right amount of processing. The eight Program Memory buttons allow you to store all of this information – Program Number, Hold button On/Off status (and coordinates), Pad Motion, and the FX depth setting – to a single button for instant access during performance.

Another new innovation in the KP3 is called FX Release. Basically, FX Release adds an adjustable delay tail when you remove your finger from the pad. In addition to being a creative performance tool, FX Release also prevents the abrupt dropping out of the effect as you transition from one setting to another, providing a smoother and more musical performance. The FX Release delay effect is automatically set to the current tempo – whether manual, MIDI, auto BPM or Tap Tempo – and the amount of the FX Release and can be set and saved individually with each program.

Superior Sampling
Four Sample Bank buttons on the front panel allow you to create, play and save both looped and one-shot samples on the fly. All samples are recorded using high resolution 24-bit converters, and are stored in16-bit/48 kHz format. Samples can be saved on a Secure Digital (SD) card or transferred to computer via USB. With both mic and line inputs, the KP3 allows you to sample from a wide variety of sources.

The KP3’s sampling system thinks and speaks in the language of music, hiding incredible technology below the surface. When creating loop samples, for example, sample length is set in terms of beats, not seconds. You can generally set the sample length up to 16 beats long (extremely slow tempos capture fewer beats). When sampling is finished, the sample will immediately start playing in sync with the sample source. As the sample plays you can adjust the start time of the sample to “fine-tune” it to the original tempo, or to dial-in time shifted playback.

Time-Slicing chops a sample into separate parts. You can use the Program Memory buttons to turn these individual slices on or off in real time, creating new rhythmic patterns from the original sample as part of your performance.
Currently viewing: Korg Kaoss Pad 3 KP3 Effects Controller - Controllers